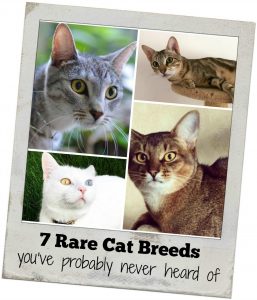 In our household, we currently have a blue point Himalayan and a seal point Birman. And while not as common as domestic short hair kitties, most cat lovers would be familiar with these breeds.

When I came upon this cat breed infographic, I discovered several breeds that I wasn’t familiar with.

As you can see above, Australian Mists have short hair that is either spotted or marbled. In fact it was originally known as the Spotted Mist until the marbled variety was accepted into the breed in 1998. Common colors for this striking breed are lilac, brown, chocolate, peach, and gold.

Their striking green eyes are a distinguishing feature and they can come in a wide variety of shades. They are a medium sized cat with a stocky build and muscular chest.

This breed is known for its even temperament, sense of humor, and loving nature. Another lovely trait of these beautiful kitties is that you can train them. They can learn to sit, come, play fetch, and walk on a leash.

The Chausie is the result of mixing various domestic cats and a wild jungle cat (felis chaus). Most Chausies today are removed far enough from their jungle cat roots that they have fully domestic temperaments. Chausies are known as “stone cougars” because their ticked, brown fur and head-shape are reminiscent of a cougar. They can also come in solid black and black grizzled tabby.

These cats are medium to large sized but have a longer, leaner look than many other breeds. Their long legs were built for running and jumping. Chausies are very intelligent and athletic. They are described by their owners as being constantly in motion when interacting with them. They are also known to develop deep bonds with their people.

According to The Animal Planet, the Sokoke breed is one of the rarest in the world. It’s wild cat ancestors originate from the Arabuke-Sokoke rainforest in Kenya.

The head of the Sokoke looks small relative to its body. The top of the head (between the ears) is almost flat. Its chin is strong and well-defined, the eyes are almond and usually amber colored. The ears are long which help give the breed its characteristic “alert” expression.

Due to its wild cat ancestory, the Sokoke is muscular, yet elegant. Its hind legs are longer than its front legs, which gives it a unique gait as compared to other domestic cats. The tail of the Sokoke is long and tapered, with wide dark rings.

This breed is another that’s usually quite active and probably more suited to living in a larger home as opposed to a small apartment. They are known for being vocal with their people, much like Siamese cats and other “talkative” breeds.

The Dragon Li is a domestic cat breed that originates from the subspecies of Chinese wildcat, felis silvestris bieti. It is also known as the “Mau Li Hua,” the “Li Hua Mao,” and the “Mao Li.”

It has a strong, powerful, thick body, and muscular legs. The Dragon Li has a diamond-shaped head and large, luminous eyes in green or yellow. It’s medium sized ears are rounded with their characteristic tipping at the ends. Its brown, mackerel tabby fur is ticked and its belly has light leopard spots.

They are a slow maturing breed and may not reach full size until 3 years of age.

The Dragon Li is an independent cat and not as demanding as say, Burmese or Abyssinians. Although they are considered one of the earliest cat breeds, they were not recognized in the show ring until 2003.

They are still very uncommon in the United States.

Native to Thailand, Khao Manee means “White Gem.” One look at these beautiful creatures confirms this breed has been aptly name.

Khao Manee cats have striking white fur and one of the most distinctive features is that they often have two different eye colors. They are also known as the Diamond Eye cat.

Like other white cats, they can have hearing impairments. Nevertheless, they are a very affectionate breed and, like their Siamese cousins, are quite the vocalists!

They are another ancient breed and are said to have been kept by Siam royalty. Despite their long history and various recordings in art and texts, they are new to the western world’s show circuit. In fact, the first Khao Manee was only imported to the U.S. in 1999!

The Arabian Mau is native to the Arabian Peninsula in the Middle East and one of the oldest natural cat breeds. They are a very strong and hardy breed, being native to the desert and having adapted well to the extreme climate.

They are a medium sized cat with noticeably large ears that are rounded at the tip. They usually have bright green eyes, of varying shades.

They are well known for their affectionate temperament and make wonderful companions. In fact, their devotion to their human is one of their major draws. They are not a vocal breed.

The Donskoy breed originates from Russia. It’s a relatively new breed, with breeding having only begun in 1987.

Despite the lack of a coat, they do require regular grooming to maintain healthy skin.

They are a very affectionate breed who will demand the attention of their human!

← Do You Know Your Cat Breeds? [Infographic]

Visit our store for unique cat themed gifts and more!

We are a participant of the Amazon Services LLC Associates Program, an affiliate advertising program designed to provide a means for us to earn fees by linking to Amazon.com and affiliated sites.